I received a copy of TANGLED ASHES by Michele Phoenix from Tyndale Fiction via Handlebar Central.  This adult novel, with plenty of action and mystery, is based on World War II.  I shouldn’t say that’s my favorite topic – it is much too dark and morbid.  However, I do read a lot of novels on the subject.  This fits in well with those, so I recommend this to anyone interested in the Holocaust – if “interested” is the right word.

The book focuses on a Manor in France.  The best part?  It’s a real place!  I hope to visit it someday.  The author paints it into a beautiful, majestic light, interweaving history with nature.  The story jumps between World War II and 2001.  In 2001, Becker is hired to restore the manor for the owner’s wife’s birthday; time to welcome a cast of unique, realistic characters.  I loved the descriptions and the discovered artifacts.  The manor really came to life for me.

In World War II, the manor was used by the Nazis as a “baby factory.”  Aryan women, whose babies had been sired by Nazi soldiers, came to the Manor to bear their children.  After the baby was born, the women had to leave them there to be raised.  A servant in the house decides to steal one away…  I’ll leave it at that to avoid spoiling the plot.
Posted by Jori at 9:04 AM No comments:


I received a copy of THE RIVER by Michael Neal from Thomas Nelson via BookSneeze.  I was excited to start reading.  Based on the reviews and back cover, I expected a book that would change my life, filled with mystery and courage.  By the time I finished, I had mixed feelings.  Unlike the reviews, this book didn’t change my life.  Yes, it did have powerful messages, but I didn’t look at the world through new eyes.

Gabriel Clarke is raised by his father beside the River.  When Gabe is five, his father drowns and Gabe moves to Kansas to live with his mother.  He grows up frightened and insecure, until he eventually returns to the River.  He faces his fears while coming to terms with his father’s death.  I definitely recommend this book to anyone who has had something traumatic happen in his or her life.

A few writing techniques in the book bothered me.  The author used simple, almost childlike sentences that made the story awkward to read at times.  There were also a lot of exclamation points and passive sentences, not to mention moments of Telling rather than Showing; I’ve learned from numerous writing websites not to use those techniques.

As a final note, the book’s cover is very eye-catching.  It holds the old world elegance of a diary.  I read THE RIVER at work and left my copy on my desk.  Many people came over to ask me about it.  Normally, no one questions the books I read.


I know everyone is different, but this writer (me) writes so that other people can find enjoyment in her words.  My stories wouldn’t be what they are with my critique partners.  One of my most amazing critique partners is L. M. Preston.  Let’s all share the love – help me help her celebrate the release of her new book, PURGATORY REIGN.  It’s a paranormal romance, action adventure novel for young adults.  The eBook will be released in March 2013 and the print version will come out in May 2013. 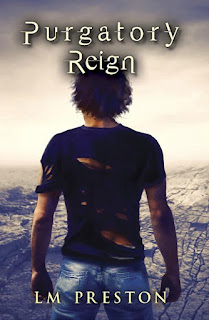 Instead of me raving about how incredibly awesome the book is (and yes, it is.  I’ve already read it), here are some links so you can check it out yourself:

(Is it just me, or are book trailers totally addicting?  I can’t stop watching them.  Then I get that giddy, I-can’t-wait-to-read-this feeling and grab a copy)

(See what I mean about the awesomeness?)